This number seven occupant is really a feces eater, but they don’t feast on people’s waste. They much prefer to dine on the buffalo’s dung. That’s sort of reassuring, I guess.

These insects, regardless of how tough some of them are, are so essential to their diet that people pay a great deal just to serve them on their tables. Many foreigners who seek such peculiar dining experiences say that they’re (the bugs) not that bad at all. Some, like the giant water bug, even tastes rather palatable. Dung beetles don’t taste horrible either. In fact, they are quite yummy and very crunchy. Or so they say.

Usually, a little bit of salt, some chili and scented herbs are added to these creepy-crawlers. They are dipped into curry mixes and sauces, and are eaten with rice.

Salmon is good. Smoked salmon in particular is even better. But inbred Alaskans eat salmon in their own unparalleled quirky manner. One of their many traditional dishes is fermented salmon heads, or what they called stink heads. So how did they get such a smelly moniker?

First, during the summer months when king salmon are abundant, they are gathered and their heads are cut off. Then the heads are put inside plastic or wooden barrels, or any food container, and buried in the ground in specially-made fermentation pits. They are left there for at least three weeks to let nature do its thing. By-and-by, these heads are harvested and consumed with gusto as a pasty mash.

Did you notice how king salmon heads are prepared? You can read it again. They are not actually fermented. No salt, vinegar or any other condiments are used in the so-called fermentation process. The heads are basically just left to rot and decompose. Just imagine the stench these head-filled barrels would produce when unearthed and opened. That’s why these poor king salmons’ mutilated body parts are called stinky heads.

Although native Alaskans consider it a delicacy, stinky heads can in fact cause botulism. This type of food poisoning is fortunately avoidable. But regional Alaskan healthcare professionals are continually challenged by this disease because of this treasured indigenous dish.

Bats are pretty much nasty-looking creatures. And since the conception of fanged shape-shifting Count Dracula, Lestat and other vampire characters, and of course Batman, bats – big or small, vegetarian or not – almost always remind me of these blood-sucking silver screen monsters. You can’t blame me though – that’s how they are portrayed, thanks to our imaginative moviemakers.

It would be just fine if they were exploited solely as imagery of human vampires and the mortal enemy of the Joker. But these nocturnal little guys are also used as the main ingredient in exotic Asian soup and dishes. Their very unfortunate short lives don’t end with much mercy from those who eat them. They are cooked in a most horrible way.

First, they are netted out from the trees of remote areas in Thailand and the Philippines. Then one-by-one, they are tossed into the burning furnace still alive and flapping. As the fire cooks them slowly, you can actually hear these poor things crying and squeaking, or should I say screaming, from pain. Soon, their little sounds die down and all you see are blackened flying mice.

After such dire end, they are eviscerated with a little brush here-and-there to remove ashes, cut into pieces, and then cooked adobo-style (with vinegar, soy sauce, pepper, garlic and onion).

Another way of the are often sentenced to death is not much sweeter. In this way, they are once again still alive, and that’s the novelty of it. While still squirming and shrieking, they are dropped into a pot of boiling milk or water. Then they are gutted, spiced, and roasted to the desired doneness. They are also chopped and made into paste (much like the krill paste), and sprinkled with Thai herbs and spices. How about a fruit bat soup, anyone?

Although bats are inextricable elements of Thai (or Asian) cuisine, they are also infamous rabies carriers. Maybe that’s their way of getting even with their avid eaters.

Many Iceland tourists say that you’ve never been to Iceland unless you’ve tried Hakari. Hakari is basically a fermented dead Greenland or Basking shark. So how is it done, and what makes it climb to number four in my countdown?

Its fermenting process is much like that of the King salmon’s head. It is gutted first, then fermented for at least two months without any fermenting agents like vinegar, salt and spices. Hakari is available all year round in many Icelandic groceries and stores. It is usually served in cubes on toothpicks, just like your regular finger foods. Hakari reeks with ammonia stench, which basically makes it extremely gross to eat, especially if you’re not a local.

If you ever find yourself in the snowy ground of Iceland, why not grab a toothpickful of one of these moldy cubes? I’m sure it won’t hurt or kill you. But you might wish it had. Don’t worry though. A shot of their famous Brennivin will complement Hakari perfectly. And oh, Brennivin is a schanapps made from fermented potato pulp amalgamated with caraway seeds for flavoring. Sounds so perfect, right? 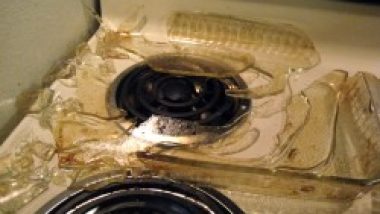